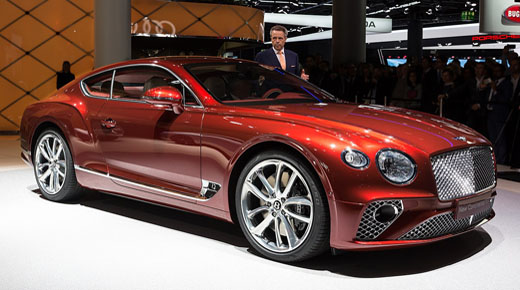 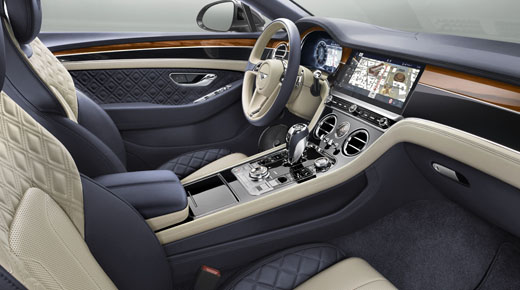 Designed by John Paul Gregory and Darren Day, the latest Continental GT model redefines what a grand tourer can be. The all new third-generation model was announced by the press on the 29th August 2017 and made its physical debut at the 2017 Frankfurt Motor Show where it attracted great interest.

This model shares the Volkswagen-developed MSB platform with the second-generation Porsche Panamera. Compared to previous versions, this model features a lighter body, an extended wheelbase and a new 6.0-litre W12 TSI engine. The sumptuous interior has also had a major overhaul.

The Continental GT is the first production car ever to have an entire body side made from the 'Super Formed' process; a precision technique with aluminium which allows more complex, sharply defined body lines.

POWER -  The The W12 engine is an enhanced version of the TSI engine launched in the Bentayga in 2016. It features high- and low- pressure direct fuel injection, a variable displacement system, stop-start technology and launch mode, the powertrain produces 635 PS (626 hp) and 900 N⋅m (664 lb⋅ft) of torque.

The new Continental GT is built by hand in Crewe. As a new buyer you are offered almost limitless scope for personalisation. With the vast range of options available for both the exterior and interior, you can be certain that you are going to own a unique version of a prestige car that will be unlike any other on the road.

"One of the highlights of the Bentley’s cabin is a 12.3-inch touchscreen infotainment system. It’s permanently on display in standard spec, but the Rotating Display option means it’s hidden behind the wood veneer dash when the engine is switched off, and only swivels into view when you fire the car up. If you want a more ‘classic’ feel, you can rotate it again to reveal a third face, which is a veneer panel housing three analogue instruments – chronograph, compass and temperature gauge. When hidden, the navigation mapping can be shown on the digital screen between the instruments in front of the driver, making the Rotating Display a neat option.."